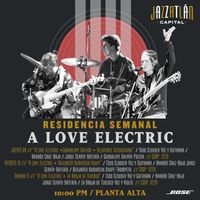 Todd Clouser presents a moving suite of songs, caroming between lo-fi folk, Americana-colored jazz, and spoken word, in honor of the students gone missing Sept 26, 2014 in the Mexican state of Guerrero.

Boy 44 finds the prolific and unpredictable Clouser at his most intimate, as social justice advocate, wide eyed musician, and poet. Accompanying Clouser on piano is John Medeski, the duo joined by Mexican upright bassist Aaron Cruz and drummer Gustavo Nandayapa.

The Mexico I know
Is not the Mexico you know

The Mexico I know is not the pieces of people on the fronts of the newspapers,
on the black and white corners in the color morning
Blood and limbs
Blood and limbs

But this Mexico I know is being visited by the empty

The Mexico I know sees itself in everything, wondering where it fits

This Mexico I know is not the one
of the President with extended chest, at the cheap podium in front of his employees,
purposefully syllabic, “ we are defending our institutions”
That he must know are as broken as his heart

This Mexico I know
Is not the same as the mother in Guerrero who lost her child in the great betrayal of humanity, its weaponizing of itself
But this Mexico I know
Needs no sympathy
Whether it asks for it or not

The Mexico I know laughs at itself but not the rest

The Mexico I know is the symptom of our madly invented impulse world, in both beauty and disgrace
And the naked heart
A lung fallen into itself
Choking on its speaking
This Mexico I know
Walks its blood without skin
It is all the broken us
In shouting sun
And it is the perfect us
In the same wicked, shadeless, shriek of sun
This Mexico I know is trying to find the bright in me
For that, and the rest, I’ll love it forever

Clouser explains Boy 44 - In April 2015 I was asked to play at a progressive music festival in Mexico City, and the organizers wanted it to be me and John Medeski in Duo. We had complete freedom to choose what we wanted to play. It was a dream scenario for me, and knowing John a bit, as teacher and now as friend, I thought it would be a good chance to write new music, meant just for the festival. At that time in Mexico City, where I have lived for 4 years now, and still to this day, there were daily protests over a tragedy in the Mexican state of Guerrero. On Sept 26, 2014, 43 students were disappeared, now assumed murdered, by police near the town of Ayotzinapa, where they studied at a rural school.

One of the missing students in particular had a story that stuck me. Jhosivanni Guerrero de la Cruz lived in the nearby town of Omeapa and walked 4 kilometers daily to catch the bus that took him to school at Ayotzinapa. I wrote the music of Boy 44 inspired by the bit I knew about Jhosivanni’s life and my experience as an immigrant living in Mexico. Medeski and I performed the music in duo in April 2015 and leaving John said, “we should just go in and record that the next day you are up in New York.” It took some time to get together, but a few months after the festival, we sat down to record some at Jamie Saft’s studio, and the rest I did back at home in Mexico City.